Building upon the relationship between the School of Medicine and Dignity Health St. Joseph’s Hospital and Medical Center in Phoenix, the College of Nursing is establishing an Arizona nursing program. Beginning in January 2018, Creighton will offer its accelerated BSN and RN-to-BSN programs in Phoenix. Catherine Todero, PhD, RN, FAAN, BSN’72, dean of the Creighton College of Nursing (left), and Julie Manz, PhD, RN, BSN’98, MS’05, chair of Creighton’s BSN program, have spearheaded Creighton’s efforts to establish a nursing program in Phoenix. Manz said the University has received approval from the Arizona State Board of Nursing for the programs. 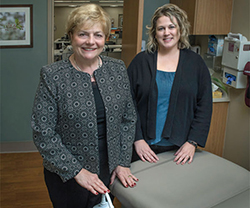 The need for health care services in Arizona is expected to increase substantially due to rapid population growth. According to U.S. Census data, Arizona ranked among the top 10 states for population growth between 2015 and 2016 and, as a popular retirement state, also has one of the fastest-growing older populations. The state’s population aged 65 and older increased 32 percent between 2000 and 2010, the fifth-largest jump among all states, according to the Census Bureau. One recent study showed there could be job openings for 50,000 registered nurses in Arizona over the next decade.

In the next two to three years, the College of Nursing hopes to offer clinical experiences to support the traditional BSN as well. “We plan that our initial Phoenix enrollment will be 60 students the first year, with potential growth in subsequent years,” Manz says. “We will have a dual admission cycle and admit in January and August each year.” 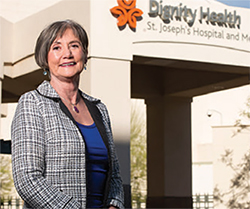 Dignity Health St. Joseph’s Hospital and Medical Center’s president and CEO, Patty White, who also is a cardiovascular nurse, was the catalyst for Creighton’s nursing education expansion into Phoenix. “Creighton’s nursing program has a great reputation, so I wanted to see if we could partner in a program in Phoenix,” White says. “Creighton graduates well-educated and well-prepared nurses, and we wanted to be a part of that.”

One Phoenix area resident who is especially happy about the nursing expansion is Annette Statz Dunlap, RN, BSN’84. The Creighton graduate is retired now, but she has worked in nursing in a variety of settings in Arizona, including workers’ compensation case management, utilization review, case management and legal expert witnessing. She also worked as a critical care nurse for years. “I think it’s great that Creighton is offering a nursing program at St Joe’s,” Dunlap says. “St Joseph’s is an excellent teaching hospital with some of the best staff physicians in the state. It is a big tertiary care hospital with diverse clientele and pathologies, making the learning experience even better.” She sees the area’s nursing shortage firsthand, especially for full-time hospital nurses, and adds that hospital nursing experience is “imperative to a strong foundation for opportunities outside of the hospital system” as well.

Dean Todero views the nursing college’s expansion as a first step for other opportunities. “Nursing will begin with our accelerated program, but I could see a model where clinical experiences for our traditional students could be built on two preliminary years on the Omaha campus in a two-plus-two type of model,” Todero says. “I also envision that a presence in Phoenix could promote opportunities for future learners to access other programs, including our online RN-to-BSN and DNP programs, but other Creighton options as well.” She is hopeful Creighton will have the full cadre of its health sciences students in the Phoenix community soon.

The full version of this story appears in the 2016-17 College of Nursing Progress Report.