The College of Nursing has joined the medical school in widening the University’s reach to the Southwest, as the accelerated nursing program enrolled its first 21 students at the Creighton health sciences campus in Phoenix.

The partnership with Dignity Health St. Joseph’s Hospital and Medical Center was begun in 2009 and expanded this January to include nursing. “The students are very hard-working, driven and responsible,” says Katherine Jorgensen, MSN, MBA, assistant dean. “It has been a pleasure working with them.” Jorgensen is new to Creighton but has been in higher education for five years. She has a clinical background in neonatal nursing and pediatrics as a staff nurse, manager and educator.

She is operating under dual visions for the program. “Our immediate vision is to turn out high-quality nurses who can think critically, are proficient and professional, and can see the big picture of the future of health care.” The strategic vision is for growth, with more nursing and other health professional programs being added in Phoenix.  In fact, she has been discussing opportunities for interprofessional collaboration with the associate medical dean on the Phoenix campus, and she received a grant from Creighton’s Teaching and Learning Center to study the educational impact of interprofessional simulation on nursing and medical students.

Nursing students enter the Phoenix program with prior degrees. “They have at least a bachelor’s and some have a master’s,” says Jorgensen. “It is a fast pace — in one year they graduate and are eligible for the National Council Licensure Examination (NCLEX-RN).” They come from various backgrounds — psychology, physiology, biology, business, math, finance, elementary education, dental hygiene and more. Their ages are 25 to 50, with one being a grandfather. Half of the cohort is from Arizona; others are from New Jersey, California, Oregon, Washington, Colorado and more. “Their diversity is fabulous,” Jorgensen says.

The students especially enjoyed their first clinicals, which are eight-week terms. They attend class on Mondays and Fridays, for six hours each day, and have 12-hour clinical shifts on Tuesdays, Wednesdays and Thursdays. One of those clinical days each week is at a community organization, focusing on health promotion and wellness.

Student Melissa Malloff, 32, was born and raised in Tempe, Arizona. She holds a bachelor’s degree in kinesiology from Arizona State University and a master’s in medical science from the University of South Florida. She considered many avenues of clinical medicine, but struggled to find the right fit. Most recently she ran an independent tutoring business, working with college, pre-med, pre-nursing, nursing and physician assistant students in their science courses. “For the last five years, I have been doing intense soul-searching,” she says. “I discovered that I really value hands-on care and imperative time spent with the patient. I realized nursing was my calling.”

Her friend attained an accelerated nursing degree from Creighton and encouraged her to look into it. “She sold me on Creighton so well that I was willing to move to Omaha. I logged on to the website and saw a little blurb about a Phoenix program coming soon. I decided to move back to Phoenix, where my family is, to matriculate. “Being able to complete my degree in one year was incredibly appealing. I had opportunities elsewhere, but Creighton’s reputation, and how the admissions staff treated me, really pulled me in.” 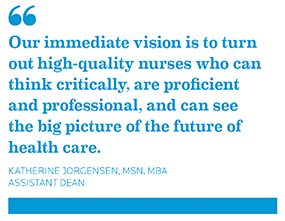 Having already earned a master’s degree in medical science, Malloff was ready to tackle the clinical component of her education. “The simulation lab and ability to train in the hospital every week is incredible. I don’t know of any program that has access to what we have here in Phoenix, especially so early in the program.” Malloff also serves on the Nursing Senate, which connects the Phoenix campus to the main program in Omaha and coordinates volunteer projects in the Phoenix area.

Fellow student Sarah McCroy, 28, was living in Seattle prior to applying to the program. She holds degrees in mathematics and business, with a concentration in finance. After college, she was a senior data analyst at a consulting firm in Maryland. In 2015, she left her job to hike the Pacific Crest Trail. “During my journey, I interacted with nurses who helped me realize that the nursing profession fulfilled many of the goals I had for my next career — creating kinship with diverse populations and developing skills that I could use to serve vulnerable people. As an outdoor adventurer, I also appreciated that it offers work-life balance.”

Her father in Phoenix suggested she look into Creighton. She found the condensed program with a “nursing curriculum rooted in social justice” to be just what she was looking for. “I’m amazed at how much I have learned in such a short time. I’m also thrilled that I will be able to completely change careers before I am 30.”

Assistant Dean Jorgensen is thrilled with how the program is going: “Working with Creighton is a joy. Everyone is wonderful, just wonderful.” She says the plan is to admit students twice a year, with 48 planned for August, and, “So far, we’re looking really good.” Students are often hired where they do clinicals, Jorgensen says, and there is a strong demand for nurses in Phoenix. “I tell the students, it’s not an easy year, but it’s just a year.”

Learn about the Accelerated Bachelor of Science in Nursing.

Learn about Creighton University’s other health sciences efforts in Phoenix.